My Żuk got the latest brakes system it could, with automatic adjustement and suspended pedal:

I consider installing Lublin disc brakes but, at the moment, I just want the original back in working order, especially since brakes were not properly working well the vehicle was acquired. Even if it would be cheaper to directly go to the replacement, it is not that expensive and it gives me opportunity to get properly familiar with the standard setup.

The rear brakes pipes were already changed, so this article will cover the overall service brakes refreshing, including new shoes front/rear and new front pipes, except those previously changed. Putting back the parking brake will be dealth in another article.

There is nothing side-specific, no nut with inverted thread, etc, it is completely symmetrical.

Front wheels are the easier to deal with because they do not have parking brake elements and because the whole wheel hub can be removed willy-nilly, not being part of a larger axle.

The disc drum is attached to the hub with 3 screws. The hub is attached with one M24 nut (36 hexagonal key), but it should not very tight, secured by a 5×40 pin that will need to be replaced afterwards. 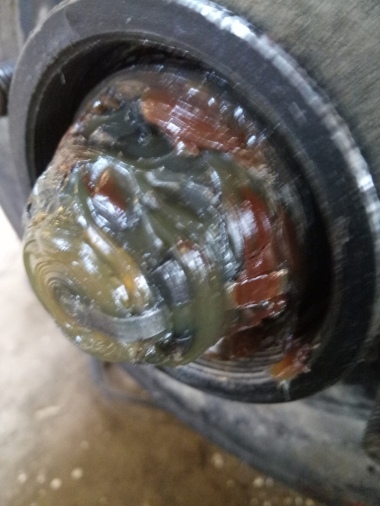 Once the hub removed, along with the drum, we get a clear view of the front brake system: two cylinders on the sides, linked by a pipe, brakes shoes on top and at the bottom; the whole attached on the backing plate. The backing plate itself is attached to the kingpin by 4 bolts. 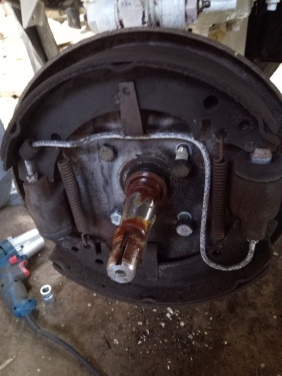 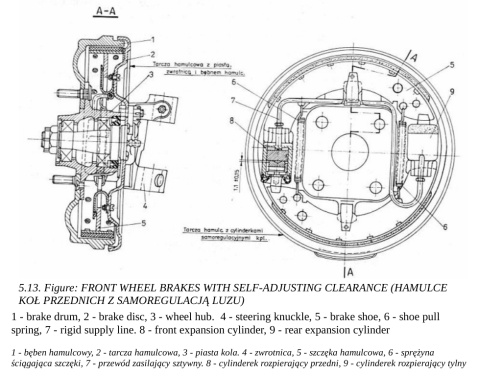 As soon as the backing plate is let go, there is also the part connected to the tie rod end that comes along. Perfect to clean it up.

Not a lot to say, lot of dirt and rust: 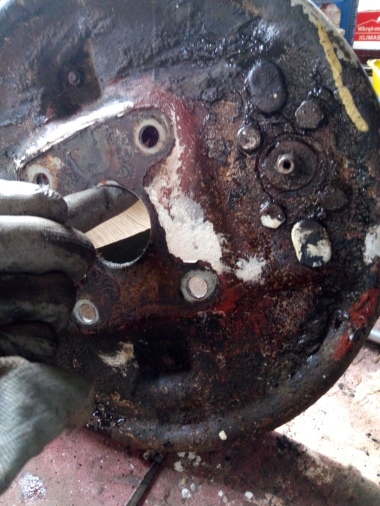 The nightmare of drum brakes are the springs it comes with. Since it is recommended to change them anyway, I saved time by cutting them. Next is rust removal, with the usual tools used so far/Restom PAC 2030, and then paint with basic cheap anti-rust primer and paint: 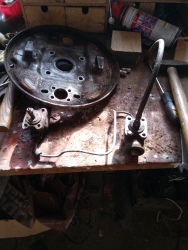 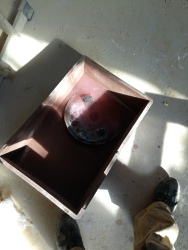 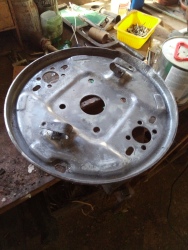 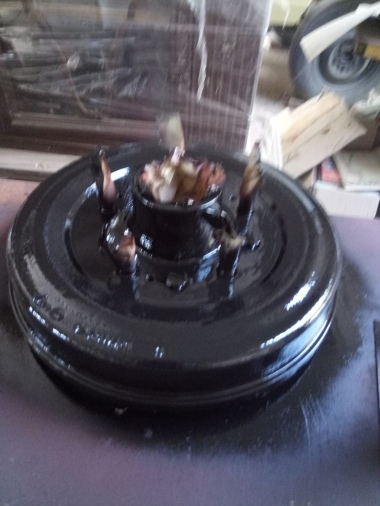 Once done, new items are put back on the backing plate: pipe, cylinders, springs and shoes. Everything goes smoothly…

… except the springs. I thought I’d be fine with cheap dedicated pliers. They broke down after 2 springs. So I had to resort to brute force with a large flat screwdriver. Not convenient but it worked: 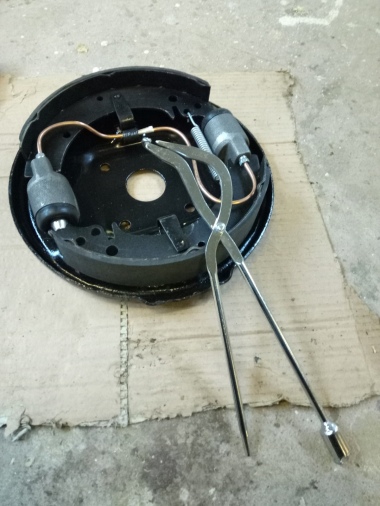 I forgot to make picture for the rest but it really only a matter of putting back the hub along with the drum. I cleaned up the old grease from the hub as much as possible, put new grease ŁT 43 (per BEN recommendation), tighten the nut and untighten it a bit, put back a new pin (as always, overheat of the hub would be it is too tight, it will have to be monitored when the vehicle will be back on the road), put back the grease/greased cap.

I renewed all the pipes. Mostly because the old one where metal ones and I prefer to have copper pipes, because corrosion is less of a problem. I did not make pictures, it was kind of plug and play, except of the flexible ones, whose locking mechanism get in place by brute force: 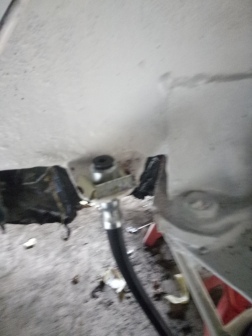 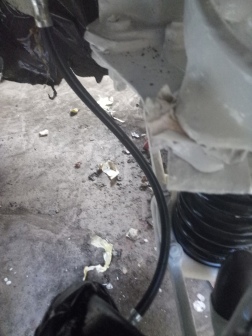 Next in order are rear drums. More complicated due to the handbrake… and due to the rust setting in in the left drum, after the brake fluid leak that was there when I bought the vehicle. So for the right, nothing specific regarding the removal, this time we wont get the backing plate of. I do not want, at this point, to deal with the drive axle, we’ll work around it. 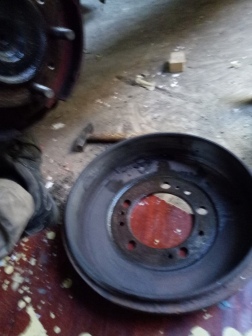 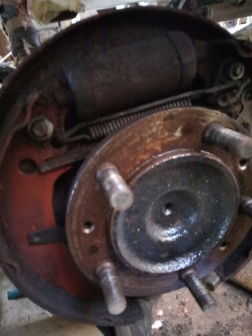 So now we get a better view of the rear brake mechanism: 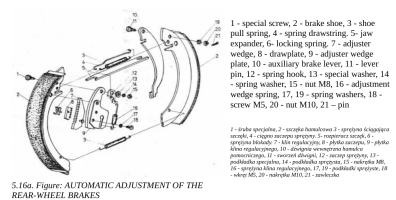 Coming to the left, it took three day to get results. It started with screwed up screws, that I took off only by luck, with the help of a hammer: 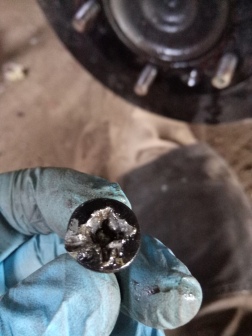 And then the drum would not budge at all. I made a contraption to remove it with no result at all. If I had not yet removed the right drum with no effort at all, I would think there was something still attached somewhere.

I even wasted time trying to understand if the mechanism of automatic adjustement could be in cause. To the point I was considering cutting the drum.

So I went for the last resort approach, using three hexagonal screws in smaller dedicated holes, something I do not like to do because, removing a drum on a 126p, I had almost really damaged the rear hub by using this technique (because if it does not comes, not only the thread get destroyed, but the turning screw attack the hub).

Did it work at once? No it did not. I put the screw, put gentle pressure on it, tons of WD 40. Nothing. Every now and then, I tried to turn the screw and put tons of WD40. When I thought it was dead, turning one screw made a noise. It slighly detached. More WD40 in the hole. And at some point it actually went off… but it took three days.

Notice the specific handbrake attachment, inside the shoe: 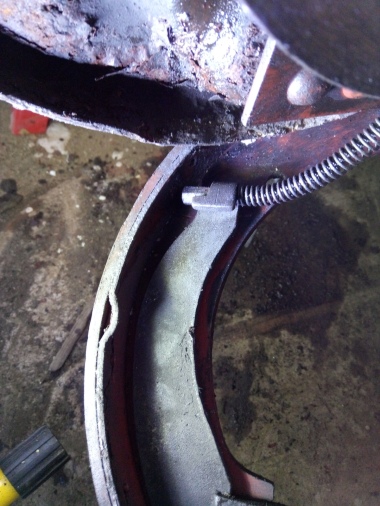 I cleaned up the drums: 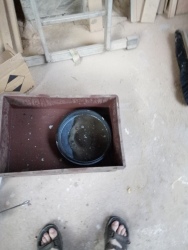 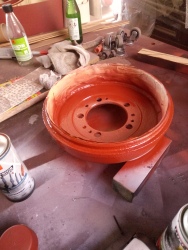 It was also the perfect opportunity to check on the automatic adjustement mechanism: to free it, you just have to push with some screwdriver in the relevant hole towards the exterior of the shoe. 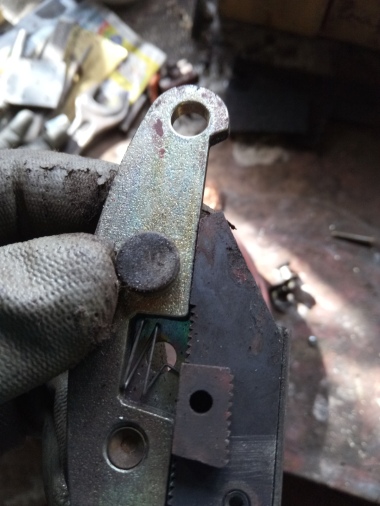 Parts were put together:

And ultimately on the vehicle, with the springs attached last, using a key cut attached to some metal bar to have sufficient strenght. Much more effective than the bought pliers: 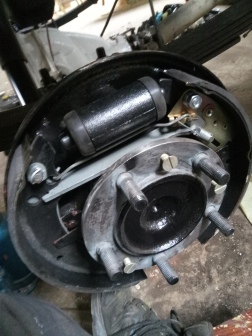 (beware of the piston: needs to be properly aligned with the shoes, especially if they went inside the cylinder when being manipulated)

The rusted mastercylinder was failing, the replacement is quite easy going. The only thing to know about it is that the tanks goes off in put to some angle, with appropriate strength. Otherwise, it is only bolt in, bolt out. 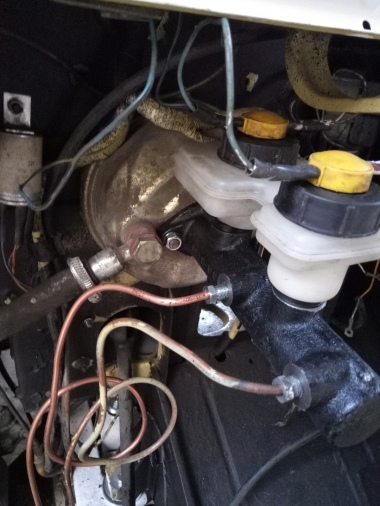 Purging air from the circuit

… will be done later in another article, once I am sure there are not miscrewed nut, leaking DOT4, etc.